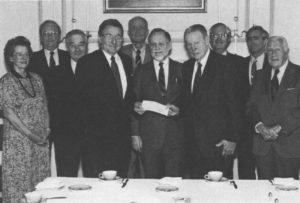 Mr. Davis for whom these fellowships are named was a 1932 graduate of the University of North Carolina. He returned to school there after retiring from Wachovia Bank and Trust Company as chairman in 1974. His history master’s degree adviser at Chapel Hill was Dr. H. G. Jones, who founded the North Carolinina Society in 1975, the same year Mr. Davis finished his thesis. Later Dr. Jones recalled that his adult student was a fine writer who had a tendency to “chase rabbits” in his research. Mr. Davis complained that his professor was killing a good story by cutting the manuscript. Eventually this give and take produced a 1,400-page master’s thesis. In 1985 it became a biography destined to be legendary from UNC Press entitled Boy Colonel of the Confederacy: The Life and Times of Henry King Burgwyn, Jr.

At the end of 1987, Mr. Davis was retiring again, this time as chairman of the Research Triangle Foundation Board. His successor as president of the Society was UNC President William C. Friday who had persuaded the Foundation Board to donate a quarter of a million dollars to establish an Archie K. Davis Endowment Fund. Its annual earnings only would be available for Davis Fellowships. That first year, 1988, the new program funded five scholars, their fellowships ranging in value from $750.00 to $2,000.00.

Each fellowship, today as then, serves the special purpose of funding an individual scholar’s access to documentary materials wherever they are preserved. The resulting scholarship has produced numerous professional papers, hundreds of articles, and scores of books. In 2010, for example, the May issue of the Journal of Southern History published reviews of six of the fourteen books recently published by Davis Fellows. At the Southern Historical Association that year, fourteen former Fellows presented papers. Moreover, through 2010 the amount of money spent directly on Davis Fellowships equaled the total amount of the original quarter of a million-dollar seed money donated to the program by the Research Triangle Foundation.

As Archie K. Davis Fellowships embrace the next era of scholarship about North Carolina history and culture, the North Caroliniana Society is poised to support this established research program through funding, administrative services, and communication links with applicants and grantees. Especially Research and Instructional Services headed by Jason Tomberlin in Wilson Library at UNC-CH is in the vanguard of this collaboration that includes, among many other records centers, the North Carolina Collection and the Southern Historical Collection at Chapel Hill and the NC Division of Archives and History in Raleigh. Almost every year several Davis Fellows include foreign travel in their plans.