A highlight of the Society’s year is the presentation of
the North Caroliniana Society Award
for long and distinguished service in the
encouragement, production, enhancement, promotion,
and preservation of North Carolina.

On June 9, 2022, the 2022 North Caroliniana Society Award was presented to William Mangum during the Annual Membership Meeting and Awards Banquet held in Chapel Hill, NC at the George Watts Hill Alumni Center.  With Society members, and family and friends of Award recipients, we were happy to be able to celebrate together.

In 2021, the Board of Directors voted to award the fifty-third North Caroliniana Society Award to William Mangum for his imaginative and creative genius that inspires compassionate entrepreneurship in himself and many others.

Remarks from William Mangum, including comments from friends and family regarding his service to North Carolina, can be found in Number 63 of the North Caroliniana Society Imprints, titled An Artist’s Perspective by William Mangum.

A video of the evening’s festivities and William Mangum’s address will be available on the Society’s website. 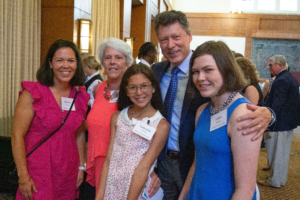 We are constantly encouraged to “find what you love and make it a career.” That is precisely what William Mangum has done. Along the way, he has utilized a multitude of talents and community relationships to craft a career in one of the most challenging of occupations
– being a professional artist. His entrepreneurial spirit has led the way for him to blend his
gifts into a multifaceted career as an artist, author, publisher, designer, keynote speaker and philanthropist.

Bill has traveled the world, gathering inspiration for more than 4,000 of his breathtaking original works of art. The resulting creations have garnered him countless fans and forged relationships around the globe. A winner of numerous national and international art awards, he has appeared in magazines and on television across the country. His immense talent and hard work have created a successful business that inspires artists to embrace entrepreneurship as a viable means to flourish in the art world. Thirteen books have been published featuring Bill’s artwork capturing his love affair with his home state of North Carolina.

In his newest chapter, Bill has transitioned from watercolors to acrylics. He has reimagined his style and broadened his work into a fascinating new collection of extraordinary contemporary paintings with new transitional landscapes celebrating nature and a keen awareness of the artist’s roots.

The ART of doing Business has been a lifelong mantra for Bill. Alliance, Resourcefulness, and Timing all play into significant opportunities for this artist to come alongside corporations, universities, and national events to help them celebrate their brand through art. Besides his artistic acumen, Bill is a noted keynote speaker who inspires others, champions causes, reflects on locales’ heritage and legacy, extolling them through his signature paintings and reflective prose. His entrepreneurial gift has allowed this artist to align his talents to assist many Fortune 500 companies, venues, and resorts celebrate a special occasion. The Biltmore Estate, Pebble Beach, Pinehurst Resort, The Masters, both the Men’s and Women’s US Opens, and numerous USGA tournaments have all utilized Bill as their official artist.

Never forgetting the blessings of his unique talent, Bill has advocated for many philanthropic causes during his professional career. His efforts have made him a true community partner as well as a tireless volunteer. One of the causes dear to his heart is championing awareness of the homeless population. Since 1988 Bill has created a painting for an annual Honor Card to raise awareness and funds for outreach shelters across North Carolina supporting the needy and hungry. Now in its 35th year the program has raised nearly $10 million to meet the needs of the impoverished community across the state.

His philanthropic outreach has been featured on NBC Evening News with Brian Williams “Making a Difference” segment on Christmas Eve. Bill has been awarded North Carolina’s highest honor, “The Order of the Longleaf Pine,” and the University of North Carolina Greensboro presented him with an Honorary Doctorate for his artistic merit, entrepreneurship, and philanthropic outreach in 2017.

Bill and his wife Cynthia reside in Greensboro and are the proud parents of two children, Preston and Berkley, along with son-in-law Marco, and three grandchildren, Jadyn, Gabriella, and Samuel. One grand dog (Cooper) and a grand hamster (Cheeto)!