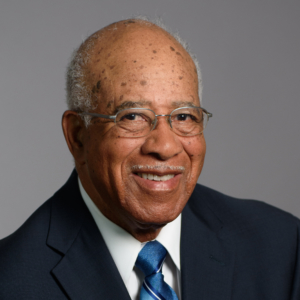 The Recipient of the 2021 North Caroliniana Society Award

The North Caroliniana Society, during 2020 and 2021, has been operating under the restrictions and constraints of the pandemic known as COVID-19.  We have held no annual membership meeting for the past two years and have been unable to celebrate our award winners in person.

In December of 2020, the Board of Directors voted to award the fifty-second North Caroliniana Society Award to Howard N. Lee. He is honored for his long public service at the local and state level over many years.

Remarks from Howard, including comments from friends and family regarding his service to North Carolina, will be found in Number 62 of the North Caroliniana Society Imprints, titled Breaking Barriers and Building Bridges: Reflections of a Son of the South.

Howard Nathaniel Lee, born July 28, 1934, grew up on a sharecropper’s farm in Lithonia, Georgia.  He graduated from Bruce High School in 1953 and enrolled in Clark College in Atlanta later transferring to Fort Valley State College in Georgia, where he received a BA degree in Sociology in 1959.  He was drafted and served two years in the United States Army, spending more than one year in Korea. After being honorably discharged in 1961, he worked as Juvenile Probation Officer in Savannah, Georgia. In 1964, he enrolled in the Graduate School of Social Work at the University of North Carolina at Chapel Hill, North Carolina, and received his master’s degree in 1966. Until 1975, Lee was a member of the faculty staff and an administrator at Duke University and visiting faculty appointment at North Carolina Central University.

In 1969, Lee was elected and served three terms (1975) as Mayor of Chapel Hill. Among his major initiatives was the implementation of the first police social work initiative, which is now the Police Crisis Unit within the Chapel Hill Police Department.

In 1976, he was a candidate for Lieutenant Governor but lost in a second primary run-off election. In 1977-1981, he served as Secretary of the Department of Natural Resources and Community Development, a cabinet-level position in the Governor Jim Hunt Administration.  Among his numerous achievements, he initiated a “Mountains to the Sea Hiking Trail,” which stretches from the North Carolina Mountains to the coast and guided the completion of the African Phase of the North Carolina Zoo.

1982-1991, he was a member of the School of Social Work faculty at The University of North Carolina at Chapel Hill.  He has lectured at numerous universities throughout the South and Nation.  Lee has contributed chapters to several books and has published articles in many professional, academic, and business publications.

In 2008, his biographical memoir, entitled: “The Courage to Lead, One Man’s Journey in Public Service” was published. In the book, Lee shares his life story and insights about how he survived the oppressive gauntlet of the Jim Crow-infested South, overcame obstacles, and broke racial barriers as he rose to positions of political prominence and power.

Lee served for 13 years in the North Carolina Senate; building his reputation as a fighter for education reform. He sponsored or co-sponsored several significant pieces of educational legislation, which included Smart Start, More at Four (a Pre-kindergarten program), the Excellent Schools Act for school reform, and the Safe Schools Act.

In 2011, he founded the Howard N Lee Institute focussed on increasing the number of minority and disadvantaged students graduating from high school and prepared to succeed in a post-secondary institution.