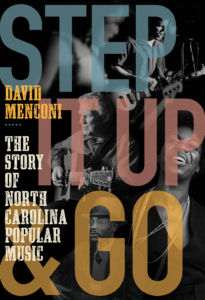 Step It Up and Go

The Story of North Carolina Popular Music,
from Blind Boy Fuller and Doc Watson
to Nina Simone and Superchunk

This year the 2020 North Caroliniana Book Award will be awarded virtually to David Menconi, author of Step It Up and Go: The Story of North Carolina Popular Music, from Blind Boy Fuller and Doc Watson to Nina Simone and Superchunk.

More details regarding the award and remarks by author David Menconi and the Society Book Award Committee can be found in Number 62 of the North Caroliniana Society Imprints, titled Breaking Barriers and Building Bridges: Reflections of a Son of the South by Howard N. Lee.

“Step It Up & Go: The Story of North Carolina Popular Music, from Blind Boy Fuller and Doc Watson to Nina Simone and Superchunk” is a love letter to the artists, scenes, and sounds defining North Carolina’s extraordinary contributions to American popular music. David Menconi spent three decades immersed in the state’s music, where traditions run deep but the energy expands in countless directions.

Menconi shows how working-class roots and rebellion tie North Carolina’s Piedmont blues, jazz, and bluegrass to beach music, rock, hip-hop, and more. From mill towns and mountain coves to college- town clubs and the stage of “American Idol,” Blind Boy Fuller and Doc Watson to Nina Simone and Superchunk, “Step It Up and Go” celebrates homegrown music just as essential to the state as barbecue and basketball.

Spanning a century of history from the dawn of recorded music to the present, and with sidebars and photos that help reveal the many-splendored glory of North Carolina’s sonic landscape, this is a must-read for every music lover. 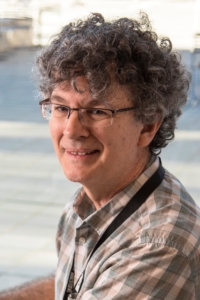 He spent 34 years writing for daily newspapers, 28 of those years at The News & Observer in Raleigh. Before that, he spent five years at the Daily Camera in Boulder, Colorado. He earned a Master’s degree in Journalism from the University of Texas/Austin and a Bachelor of Arts degree in English
from Southwestern University in Georgetown, Texas.

He has written for publications including Rolling Stone, Spin, Billboard and New York Times. He was also North Carolina’s Piedmont Laureate for 2019 in the area of creative nonfiction and biography, as well as co-editor of the University of Texas’ acclaimed American Music Series from 2011 to 2019.

His most recent book, “Step It Up & Go: The Story of North Carolina Popular Music, from Blind Boy Fuller and Doc Watson to Nina Simone and Superchunk,” was published in October 2020 by University of North Carolina Press. It won First Runner-Up in the “Culture” category of the Eric Hoffer Awards in May of 2021.

Menconi’s other books include 2012’s “Ryan Adams: Losering, A Story of Whiskeytown” (also a Hoffer Award winner, Honorable Mention in 2013); 2015’s “Comin’ Right at Ya: How A Jewish Yankee Hippie Went Country, or, the Often Outrageous History of Asleep at the Wheel”; a novel, 2000’s “Off The Record”; and the 1985 UT Master’s thesis “Music, Media and the Metropolis: The Case of Austin’s Armadillo World Headquarters.” His next book will be a history of the folk label Rounder Records, to be published in 2022 by UNC Press.