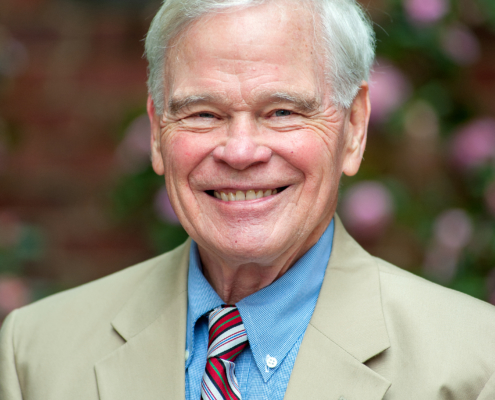 The Recipient of the 2020 North Caroliniana Society Award

The North Caroliniana Society, during much of 2020, has been operating under the restrictions and constraints of the pandemic known as COVID-19.  We have held no annual membership meeting.  Accordingly, we celebrated with the Society Award winners at the October 20, 2020 Society Board of Directors meeting, via Zoom.

In December of 2019, the Board of Directors voted to award the fifty-first North Caroliniana Society Award to D.G. Martin. He is honored for his long public service career including his years as the host of “Bookwatch” on UNC-TV.

Remarks from D.G., including comments from friends and family regarding his service to North Carolina, can be found in Number 61 of the North Caroliniana Society Imprints, titled Inside UNC-TV’s North Carolina Bookwatch by D.G. Martin.

As host of UNC-TV’s North Carolina Bookwatch for 20 years, D.G. Martin has recorded more than 400 interviews with authors of North Carolina-related books. Since 1985 he has written a weekly newspaper column that features books, politics, and related topics and is distributed throughout the state.

Although he was born in Atlanta and went to grammar school in Bristol, Tennessee, Martin grew up in Davidson, North Carolina, where his father was college president (1958-68). Martin graduated from North Mecklenburg High School and Davidson College, where he captained Lefty Driesell’s first winning college basketball team. After serving in the Army’s Special Forces, he graduated from Yale Law School and practiced law in Charlotte for 20 years. He was an elder and Sunday School teacher at Seigle Avenue Presbyterian Church and served as moderator of Mecklenburg Presbytery and the Presbyterian Synod of the Mid-Atlantic.

After losing two close campaigns for the U.S. House of Representatives in 1984 and 1986, he joined the University of North Carolina system, serving first as Secretary of the University and then as Vice President for Public Affairs and chief legislative liaison. In 1997, he left this position to run unsuccessfully for the U.S. Senate.

Since that time he has served in interim leadership positions at UNC- Pembroke, North Carolina Central University, the Trust for Public Land, the Triangle Land Conservancy, North Carolina’s Clean Water Management Trust Fund, and as President of the William R. Kenan, Jr. Fund.

When Martin began his work with the water quality trust, Jack Betts wrote a column in the Charlotte Observer headlined, “In trouble? Dial 1-800-D.G. Martin.” In his piece, Betts wrote: “Martin was a wise choice: he’s a steady hand with a devotion to North Carolina and a fine sense of judgment about what’s best for the state.”

D.G. Martin is a fan of country cooking, barbecue, and the camaraderie found in local eateries. In 2016 UNC Press published his book, North Carolina’s Roadside Eateries: The Traveler’s Guide to Local Restaurants, Diners, and Barbecue Joints, with a revised edition planned for later this year.

Martin is married to the former Harriet Howard Wall. While a native of Conway, South Carolina, Harriet Wall’s family has deep roots in Anson and Catawba counties. They met on a blind date thanks to family connections while Harriet was at Sweet Briar College. Martin credits their ongoing courtship to his immediate alliance with Harriet’s grandmother, a staunch political activist from Lilesville, Annie Lee Shuford Wall.

They have two children and four grandchildren. Their son, Grier Martin, serves in the North Carolina House of Representatives, while their daughter, May Bryan, serves as president of the Chapel Hill-Carrboro Public School Foundation.