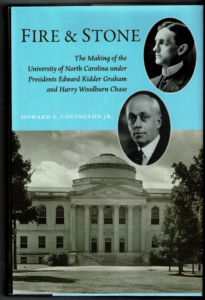 Fire and Stone:
The Making of the University of North Carolina under
Presidents Edward Kidder Graham and
Harry Woodburn Chase

The Recipient of the 2019 North Caroliniana Society Book Award

The North Caroliniana Society, during much of 2020, has been operating under the restrictions and constraints of the pandemic known as COVID-19.  We have held no annual membership meeting.  Accordingly, we celebrated with the Society Award winners at the October 20, 2020 Society Board of Directors meeting, via Zoom.

This year the 2019 North Caroliniana Book Award will be awarded virtually to Howard Covington, author of Fire and Stone: The Making of the University of North Carolina under Presidents Edward Kidder Graham and Harry Woodburn Chase.

More details regarding the award and remarks by Dannye Romine Powell can be found in Number 61 of the North Caroliniana Society Imprints, titled Inside UNC-TV’s North Carolina Bookwatch by D.G. Martin. 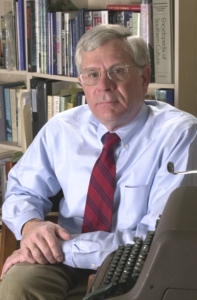 Mr. Covington is native of Concord, N.C., and a 1965 graduate of the University of Florida. He was a University Fellow of the American Political Science Association at the University of Michigan in 1973. He lives in Greensboro, N.C., where he writes history and biography.

An early newspaper career as reporter and editor began in Florida and included more than a dozen years at North Carolina’s Charlotte Observer where he created and co-wrote a series of articles on occupational health that in 1981 won, among other national awards, the Pulitzer Prize for Meritorious Public Service.

Over the last forty years, he has written more than twenty-five works of history and biography. Among his subjects is former Governor and U.S. Senator Terry Sanford, a title published by Duke University Press in 1999. He is the co- author of The Story of NationsBank: Changing the Face of American Banking, which was published by the University of North Carolina Press in 1993.

Favored by Fortune is a four-generation biography of the Hill family of Durham, N.C. It was published in 2004 by the UNC-Chapel Hill Library, and that same year received the Old North State Award from the North Carolina Literary and Historical Association for best nonfiction work by a North Carolina author.

His book about the private preservation of Biltmore Estate, Lady On The Hill, was published by John F. Wiley & Sons in 2006. It is now in its third printing. A twentieth-century history of Greensboro by Howard Covington, Once Upon A City, was published in 2008 by the Greensboro Historical Museum. In 2010, the UNC-Chapel Hill Library published The Good Government Man, a biography of Albert Coates, the founder of the Institute of Government at Chapel Hill. That was followed in 2018 with Fire and Stone, a biography of UNC presidents E.K. Graham and Harry Chase, who were responsible for the emergence of the University as a major academic institution in the first quarter of the twentieth century.

He is also the author of a 2013 biography of Henry Frye, the first African American Chief Justice of the North Carolina Supreme Court, and of a history of Linville Resorts in the mountains of North Carolina, published on the occasion of its 125th anniversary in 1992.